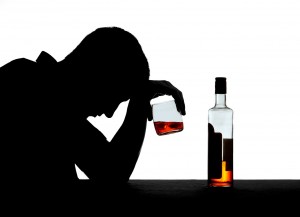 Alcohol affects cell membranes and can diffuse into nearly every biological tissue. By destroying the brain-blood barrier in the choroid plexus of the ventricular system, it allows chemicals, drugs, toxins, inflammatory factors and hormones to penetrate into the cerebrospinal fluid and brain. The ill effects are numerous – it impairs or even blocks neurotransmitter action in the synapses by the so called hyperploralization, which is basically opening of the chloride and potassium channels in the plasma membrane of the neurons, contributing to memory loss, amnesia, hangover, and even dopamine-acetylcholine nervous systems malfunctioning for blurred vision, loss of coordination and slow reactions.

It excites the neurotransmitter action by the so called deploralization, which is opening the Sodium channels in the postsynaptic receptors. Exciting the sympathetic-epinephrine nervous system, with a certain lack of serotonin and GABA modulation, will lead to: